Between the anniversary of the concert and Dizzy Gillespie’s birthday, and in advance of a celebration of Charlie "Bird" Parker by Joe Lovano Us Five on October 28—Live from Carnegie Hall this week looks at the 1947 concert that brought Gillespie and Parker together on the Carnegie Hall stage

Officially billed as a performance by "Dizzy Gillespie and His Orchestra"—with Ella Fitzgerald name-checked as a soloist—this was a meeting of giants of bebop. Pioneering bandleader and trumpeter Dizzy Gillespie and legendary saxophonist Charlie "Bird" Parker, were joined by legendary sidemen and soloists that included James Moody, Al McKibbon, Cecil Payne, and Joe Harris.

The two giants of jazz were at a very early stage of their Carnegie Hall careers on September 29, 1947. It was Bird's second appearance—he made 13 in all, the last being almost exactly seven years later on September 25, 1954, and six months before his untimely death. Although this concert marked Dizzy's third appearance at the Hall, it was his headlining debut. Gillespie went on to perform more than 50 times at Carnegie Hall, right through to the early 1990s. Regrettably, due to a terminal illness, he was forced to miss his 75th birthday celebration concert at the Hall in 1992.

The first five tracks of the album are the only ones that feature Diz and Bird together. They perform as part of the Dizzy Gillespie Quintet—with Joe Harris on drums, bassist Al McKibbon, and pianist John Lewis. Aside from the fact that it's one of the few live recordings of this duo, the album is probably most notable for their interplay on Gillespie's signature tune "A Night in Tunisia." All About Jazz describes their playing on the track as "passionate and graceful" and declares that the album "completely leaves the listener with the sense that you have just walked among the jazz giants." 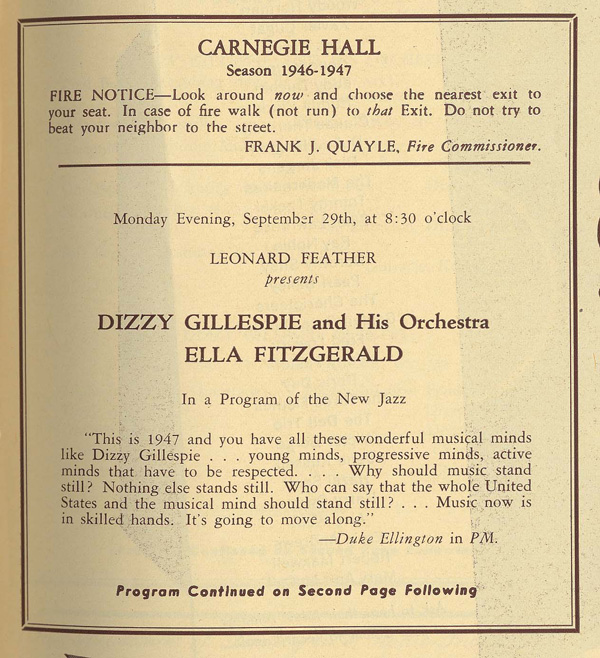 Program from the Dizzy Gillespie and Charlie Parker concert on September 29, 1947.