We had originally scheduled this Live from Carnegie Hall post for later this year to mark the 50th anniversary of Lester Flatt and Earl Scruggs's 1962 Carnegie Hall debut concert. When the news of the death of Earl Scruggs emerged last week, we decided now was an appropriate time to pay tribute to the great banjo player.

Lester Flatt and Earl Scruggs appeared together at Carnegie Hall just twice—almost a half-century ago with their joint debut on December 8, 1962, and exactly 48 years ago today on April 3, 1964. Flatt appeared once more at the Hall in a 1974 solo concert.

Although they did not appear together at the Hall again after the 1964 concert, the connections between Scruggs and Flatts and Carnegie Hall extend through to the 21st century. The band known as The Soggy Bottom Boys in the Coen brothers' 2000 film O Brother, Where Art Thou? is a tribute to Scruggs and Flatt's own Foggy Bottom Boys. Ralph Stanley—their contemporary, whose music featured prominently in O Brother, Where Art Thou?—performed with Steve Martin and the Steep Canyon Boys at Carnegie Hall as recently as October 2009. 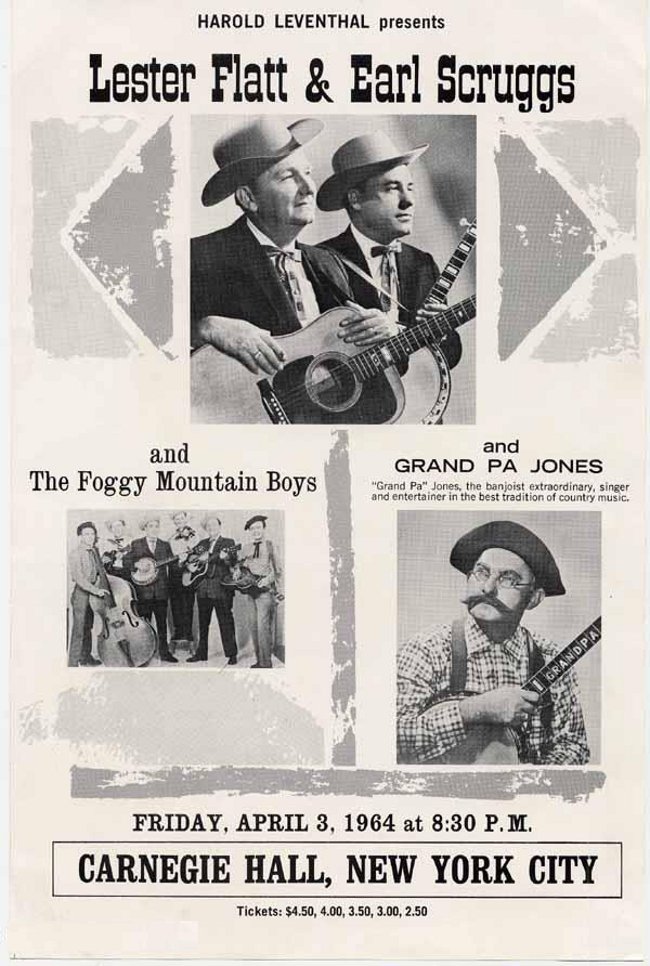 Flyer from Flatt and Scruggs's April 3, 1964, concert at Carnegie Hall. Courtesy of the Carnegie Hall Archives.