On April 14, Takács Quartet performs Ravel's String Quartet in F Major—one of 10 pieces featured in our A Golden Age of Music series. Here, we reveal some of the French composer's close ties with Carnegie Hall.

Maurice Ravel celebrated his 53rd birthday—March 7, 1928—in New York, at a party given for him by soprano Eva Gauthier. Among the guests was the 29 year-old George Gershwin. At the party, Gershwin thoroughly impressed Ravel with an impromptu performance of Rhapsody in Blue and "The Man I Love." Ravel apparently had such deep respect for Gershwin's natural melodic gift that he turned down Gershwin's request for composition lessons, telling him "it is better to write good Gershwin than bad Ravel, which is what would happen if you worked with me." Their mutual admiration would be curiously mirrored by the circumstances of their deaths—within five months of each other—less than ten years later. Gershwin died on July 11, 1937, after an operation to remove a brain tumor, while Ravel—declining steadily from a neurological disorder called "Pick's disease"—died December 28 of that year, following a similarly unsuccessful brain operation.

The day after that meeting, Ravel conducted the New York Symphony Orchestra at Carnegie Hall. He concluded this program with La Valse, a work that was given its New York premiere at the Hall in 1922 by the New York Philharmonic under Willem Mengelberg. As with many of Ravel's pieces for full orchestra, La Valse started out as a solo piano work, and in 1927, pianist Dmitri Tiomkin gave this original version its first American performance at Carnegie Hall. Tiomkin went on to have a distinguished career as a film composer, crafting scores to such films as It's a Wonderful Life, Dial M for Murder, High Noon, and The Guns of Navarone—not to mention the theme to TV's Rawhide!

Although Ravel's 1928 tour was his only visit to America, with just a single performance at Carnegie Hall, he also attended a concert of his works at the Hall given by Serge Koussevitzky and the Boston Symphony Orchestra on January 7, 1928. The program—which included Suite No. 2 from Daphnis et Chloé—so delighted the audience that "I had to appear on stage," as Ravel remarked to his brother Edouard. He was thrilled to see the entire audience "all on their feet, a tremendous ovation, including whistling."

Altogether, more than a dozen of Ravel's works had premieres at Carnegie Hall. Ravel's Piano Concerto in G Major had its New York premiere here with pianist Sylvan Levin and the Philadelphia Orchestra under conductor Leopold Stokowski on November 8, 1932, while the New York premieres of Bolero and the Piano Concerto for the Left Hand, and the US premieres of Alborada del Gracioso and Don Quichotte à Dulcinée, all took place at Carnegie Hall. 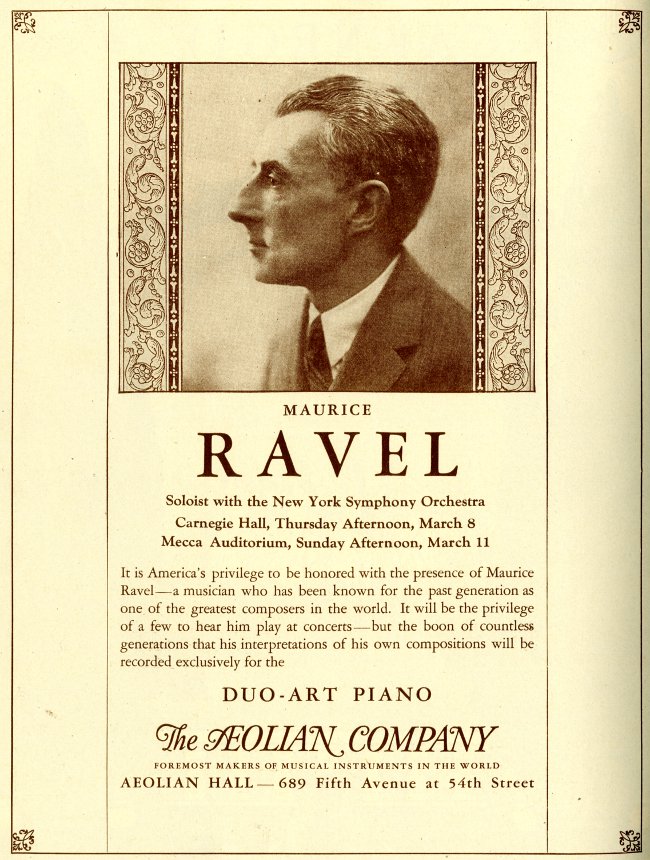