Celebrating 50 Years of Julie and Carol at Carnegie Hall: Part 2

With direct input from several of the principals, we continue our celebration of the 50th anniversary of the original airing of the CBS television special Julie and Carol at Carnegie Hall, featuring Julie Andrews and Carol Burnett.

Showtime, March 5, 1962. Cameras were stuck in every nook and cranny, recalled George Reeder, who was also struck by the image of all of the tech people and stagehands—basically, anyone within camera shot—in tuxes and bow ties. You simply never saw them this way. He was excited by the glory of being there. Randy Doney agreed. "Being in the great Carnegie Hall—with such a reputation, and lauded to be the epitome of achievement in the musical world—was beyond comprehension."

Carol remembered that both she and Julie were very nervous at showtime. When it was time to go on stage, Julie was on her left; she grabbed her hand, and they went to their places. They blew each other a kiss, and out they went.

The opening number was to be a song about the stars' supposedly opposite natures. "Mike [Nichols] and I were familiar with a game that was popular at the time," remembers Ken Welch, "a game called 'Essences,' pinpointing the essence of a personality, which inspired us to write 'You're So London.' And then, just for kicks, we wrote 'There'll Be No Mozart Tonight' to precede it, to put the audience in the right mood for the foolishness to come. They both proved to be good choices. The audience applause was deafening."

Each woman was given a slot for a single solo song, and first up—after a pause for a commercial for Lipton's Tea, the show's sponsor—was Julie.

Julie's rendition of "So Long at the Fair" was "nothing less than captivating," later remarked Jack Gould in his review of the broadcast in The New York Times. "The number came quite early in the program," continued Gould, "so that the reviewer lived in the hope, regrettably never realized, that there would be more." What Gould couldn't know is that the original program for the broadcast actually included a second solo number for each woman. Carol was supposed to sing "Johnny One-Note" and there was an unnamed selection for Julie. Ken Welch doesn't recall preparing a second selection, so they were probably cut well before the taping.

After some tongue-in-cheek ribbing by Carol while Julie was offstage—written by Mike Nichols (who also wrote Julie's similar bit following Carol's solo song)—the girls were joined by the dance ensemble for the "Nausiev Ballet," a parody of the famous Moiseyev Ballet from Russia, which had toured America to great acclaim in the late 1950s.

"For the music," notes Ken Welch, "I decided to do Russian-ized symphonic treatments of the score of Annie, Get Your Gun—as a comment on "No Business Like Show Business"—and had a great time writing Tchaikovsky-esque, Rachmaninoff-esque treatments of Berlin's tunes, which Irv [Kostal, musical director for the special] then appropriately orchestrated." Julie and Carol's commentary throughout the sequence was written by Nichols. "Mike's Russian past helped," recalled Welch. (Nichols was born Michael Igor Peschkowsky in Berlin, Germany, the son of a Russian Jewish immigrant father and German Jewish mother.) The fabulous high tenor voice belongs to ensemble member Jimmy Stover, while the second singer is Dean Parker.

Next up, Carol delivered her solo rendition of "Meantime," a torch song written expressly for this performance by composer Robert Allen and lyricist Al Stillman, the same songwriting team responsible for "Home for the Holidays" and Johnny Mathis's hit song "Chances Are." Gould later noted that although Carol "tended to be identified primarily as a gifted connoisseur of inspired antics, [she] showed that she could also do magnificent justice by the blues."

What came next was one of the truly great pieces of foreshadowing in show business. "The Sound of Music was currently running on Broadway and had not yet become a film," notes Ken Welch, "so our spoof of it may have been over the head of a large part of the TV audience. And of course neither we nor Julie had any idea that she'd later be playing Maria in the movie." Stringing—and yodeling—their way out from behind the curtain came "The Pratt Family Singers, direct from Switzerland." Leading the way was "Papa" Pratt as played by Bob Harris, father of actor Ed Harris, "who was recruited," mentions Welch, "like so many of the guys (including the great tenors in 'Nausiev') from our Garry Moore show singers and dancers." Following shortly on his heels is Randy Doney as son "Ricard." "Mama" Pratt, played by Julie, sang of "goose fat and ham fat and duck fat and lard / the things we like best are these," answered by "pigs feet and cheese" uttered by Carol as Cynthia, clearly none too happy as the sole Pratt daughter surrounded by her chirpy Alpine brothers.

Finishing up the program was another duet for Julie and Carol, followed by "Big D," the final production number. "For 'The History of Musical Comedy' medley," continues Welch, "Mike pushed for me to wind it up with 'I Have a Love' from West Side Story, so that it would wind up moving, not comic. And he was so right. And that brings us to 'Big D,' which was where it all started. (We added more cowboys for Carnegie Hall!)"

When talking to us in recently about the special, Carol pointed out how she'd long had a superstition about precipitation. Ever since she was in about the sixth grade, she noticed that whenever it rained, she got an "A" on a test; it became her good-luck charm. Leaving Carnegie Hall that night, she shared a cab with Julie on the way to an after party—and it was snowing. "You watch, chum," she remarked to Julie. "It'll be a big success."

It certainly was a success for Randy Doney. "This special started me in my television career. I was asked to be on The Garry Moore Show. So the Hall was lucky for me." Carol calls it "one of the most exciting evenings I had in show business." Two Emmy Awards, the Golden Rose from the Rose d'Or Festival in Switzerland, the 1971 reprise Julie and Carol at Lincoln Center, and the 1989 special Julie and Carol: Together Again would seem to suggest that her instincts that snowy night in 1962 were spot on. 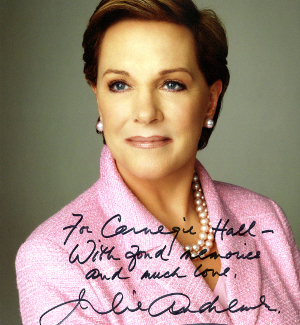 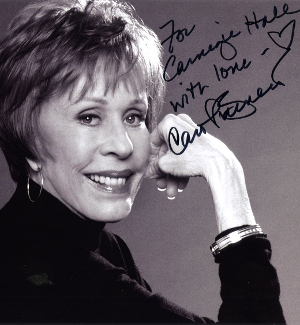 Part one of the story of Julie and Carol at Carnegie Hall is available here.