Our summer-long Live from Carnegie Hall series that focuses on albums that feature artists and music of Latin America continues with the Carnegie Hall and US debut of one of Cuba's most famous musical exports—the Buena Vista Social Club—of which the July 1 anniversary nears.

Another key figure in spreading Cuban music internationally—pianist and bandleader Chucho Valdés—serves as one of the four artistic advisors of our upcoming Voices from Latin America festival and performs two concerts during the festival.

Although its roots stretch back to World War II–era Havana, the Buena Vista Social Club phenomenon went global in 1997 with the release of the Ry Cooder–produced eponomyous album. The upshot of the worldwide interest in the music and musicians was a 1998 concert in Amsterdam followed by their Carnegie Hall concert, which All About Jazz dubbed "the pinnacle of the Buena Vista project." Wim Wenders filmed the concert for inclusion in his Buena Vista Social Club documentary (which came out the following year), but it was a decade after the concert that the full recording was finally released on CD.

The concert was a sellout, with Jon Pareles of The New York Times recounting evocatively, "With the bittersweet delicacy of a classic bolero, the Buena Vista Social Club simultaneously celebrated the vitality and virtuosity of its musicians and mourned the era they embody."

While three of the real stars of the concert—Ibrahim Ferrer, Rubén González, and Compay Segundo—all died between the live event and the release of the recordings, other members of that night's lineup—including Eliades Ochoa and Omara Portuondo (who performed here as recently as late 2010)—continue to tour internationally. 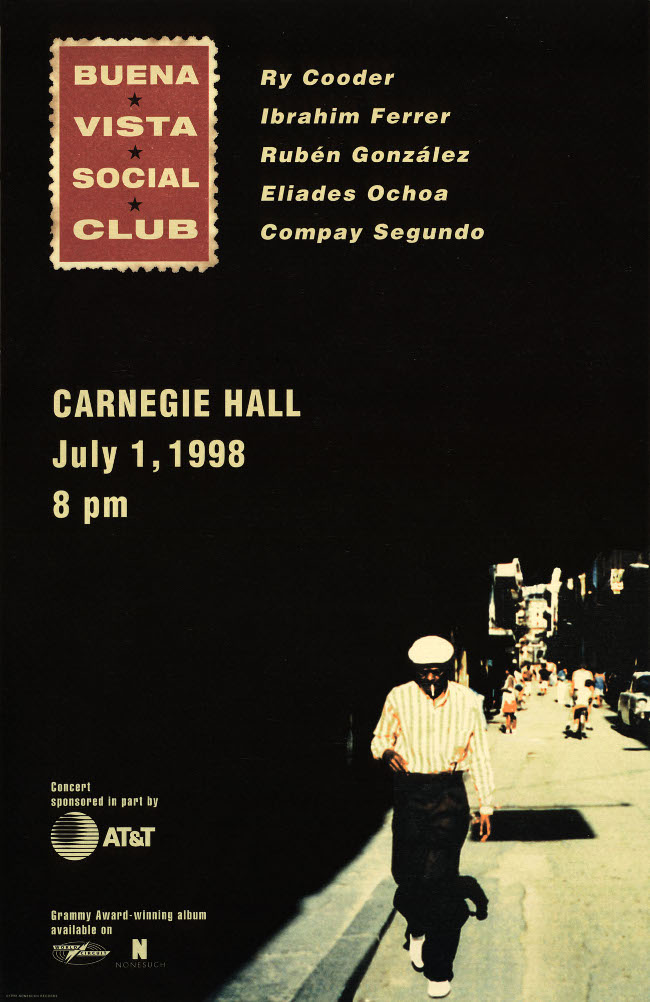 The three-sheet poster that hung outside Carnegie Hall to advertise the Buena Vista Social Club concert.