As the French celebrate Bastille Day (or La Fête Nationale) today, July 14, this installment of Live from Carnegie Hall focuses on one of the most instantly recognizable of French voices to have performed at Carnegie Hall: Edith Piaf.

Edith Piaf—born Édith Giovanna Gassion—was already a global superstar by time time she made her Carnegie Hall debut in 1956. She had first toured the US in 1947, and her frequent performances on The Ed Sullivan Show made her a familiar face to American audiences. In an early appearance on the iconic show in 1952, Piaf shared the bill with actors Roy Rogers and Dale Evans, songwriter Harold Arlen, and New York Yankees baseball stars Yogi Berra, Mickey Mantle, and Phil Rizzuto, among others.

Piaf returned to Carnegie Hall a year after her debut for a second concert but, while both were recorded, only the 1957 performance was originally released—and not until nearly a decade and a half after her death at the age of 47 in 1963.

The program for the 1957 concert included Piaf favorites that included "La vie en rose," "Padam Padam," and "L'Accordéoniste." The song that would become so closely associated with her after her death—"Non, je ne regrette rien"—was not on the set list for that night. While the song was written in 1956, Piaf did not record it until 1960.

Piaf was due to perform again at Carnegie Hall on March 25, 1959, but an announcement in The New York Times 10 days before the scheduled date noted that the concert would be postponed due to illness. Although she continued to perform around Paris through 1962, ongoing health problems meant that the Carnegie Hall concert was never rescheduled. Piaf died of cancer in October 1963. 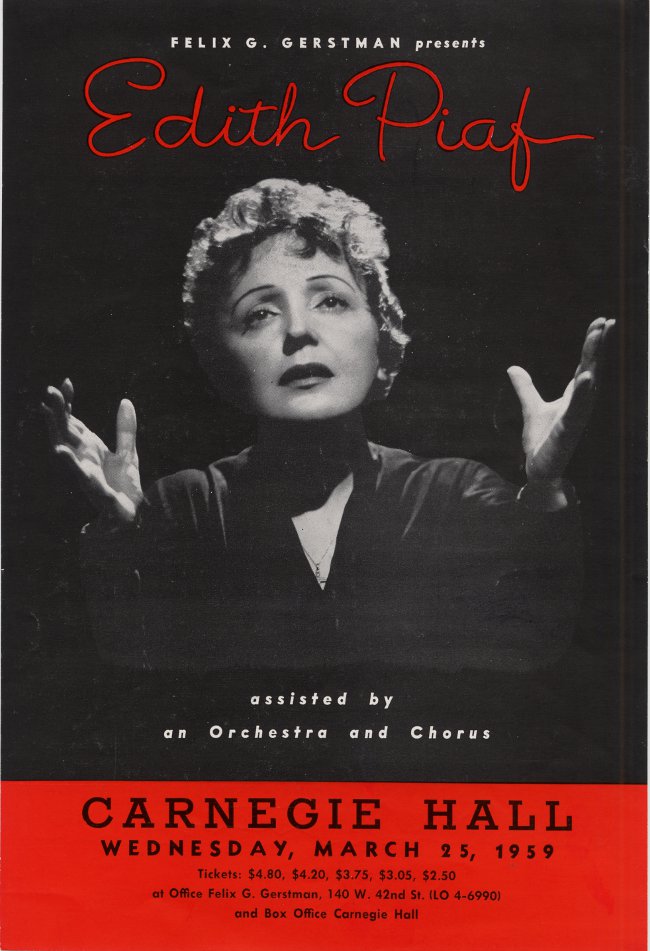