The A to Z of Carnegie Hall: B is for Bernstein

Today, we continue our new summer series The A to Z of Carnegie Hall with the letter B.

B is for Bernstein

Since 1891, a handful of names—musicians, conductors, icons, and administrators—have become synonymous with Carnegie Hall, as much a part of the fabric of the Hall as the graceful curves and clear acoustics created by William Burnet Tuthill. One of the most iconic of those was Leonard Bernstein. 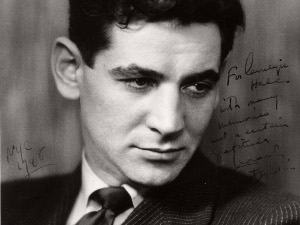 Few artists have had as close an association with Carnegie Hall as Leonard Bernstein. "Lenny" famously made his Carnegie Hall debut on November 14, 1943, substituting on a few hours' notice for the ailing Bruno Walter and conducting—for the first time—the New York Philharmonic.

The performance, as fate would have it, was broadcast nationwide on CBS Radio, and received widespread critical acclaim. Notably—at a time when European musicians were still considered to be the best in these matters—Bernstein was celebrated on the front page of The New York Times as the first American to conduct the Philharmonic.

Between 1943 and 1990, Bernstein appeared at the Hall nearly 450 times in a multitude of roles, including conductor, pianist, composer, and educator. He was even credited as a singer in the famous Concert of the Century, when some of the most iconic names in 20th-century classical music—Isaac Stern, Yehudi Menuhin, Mstislav Rostropovich, Vladimir Horowitz, and Dietrich Fischer-Dieskau—gathered on the once-threatened stage to celebrate the 85th anniversary of the opening of the Hall in 1891.

While he is most closely associated with the New York Philharmonic—which was the resident orchestra here for decades—Bernstein conducted other orchestras at Carnegie Hall throughout his life. He led the Vienna Philharmonic, Israel Philharmonic, Boston Symphony, The Philadelphia Orchestra, Cincinnati Symphony, American Composers Orchestra, Symphony of the Air, and Rochester Philharmonic. Other highlights of his Carnegie Hall career included the famous televised Young People's Concerts and the gala reopening of the Hall following its extensive renovation in 1986, at which Bernstein led the New York Philharmonic in his own Opening Prayer, the first-ever Carnegie Hall commission.

Bernstein’s music has been performed at Carnegie Hall more than 700 times—including 11 premieres—from the New York premiere of his Symphony No. 1, "Jeremiah," in March 1944 to the world premiere of the Symphonic Dances from West Side Story in February 1961.

As his fame grew, Bernstein's name could lend increasing prestige to a cause or movement. In this capacity, he also appeared at many benefits at the Hall for a wide variety of organizations and causes. These included ASCAP, the American Foundation for AIDS Research, the Carnegie Hall Endowment Campaign, America-Israel Cultural Foundation, United Jewish Appeal, Russian War Orphans, and the Musicians Foundation.

The maestro's final Carnegie Hall appearance happened on March 3, 1990, when he conducted the Vienna Philharmonic Orchestra in the final concert of three they performed that week. Starting in the early 1960s with a festival of Mahler's music at the Hall, Bernstein is credited with reviving interest in the music of Gustav Mahler—who, himself, conducted at the Hall—so it is apt that the program that night included two works by the composer.

For three months in late 2008, together with the New York Philharmonic, Carnegie Hall celebrated the life and music of the man in a citywide festival—Bernstein: The Best of All Possible Worlds. The man, his life, and his music were recalled in concerts at Carnegie Hall and other venues around the city; in film; in lectures; and in a large-scale Weill Music Institute creative learning project which saw Bernstein's Mass performed by hundreds of New York City high school students.

Lenny would have enjoyed that.

Related
A to Z of Carnegie Hall
The History of the Hall
Bernstein: The Best of All Possible Worlds festival website