The A to Z of Carnegie Hall: N is for New World Symphony

The next installment of our A to Z of Carnegie Hall series is devoted to the letter N–for the "New World" Symphony.

Carnegie Hall has seen world, US, and New York premieres of hundreds of works since its opening in 1891. The world premiere of one of the most beloved and enduring works in the classical canon took place barely 18 months after the official opening of the Hall, when Anton Seidl and the New York Philharmonic performed Dvořák's Ninth Symphony, "From the New World." Although many sources cite December 16, 1893, as the first performance of this work, a December 15 performance was open to the public and was reviewed in The New York Times.

At the official world premiere the next day, the composer listened to the December 16 concert from Box 10. Although he did not lead this performance himself, Dvořák had previously appeared at Carnegie Hall four times, including his US debut on October 21, 1892, when he conducted members of the New York Philharmonic, the New York Symphony Orchestra, soloists, and chorus in the world premiere of his Te Deum. 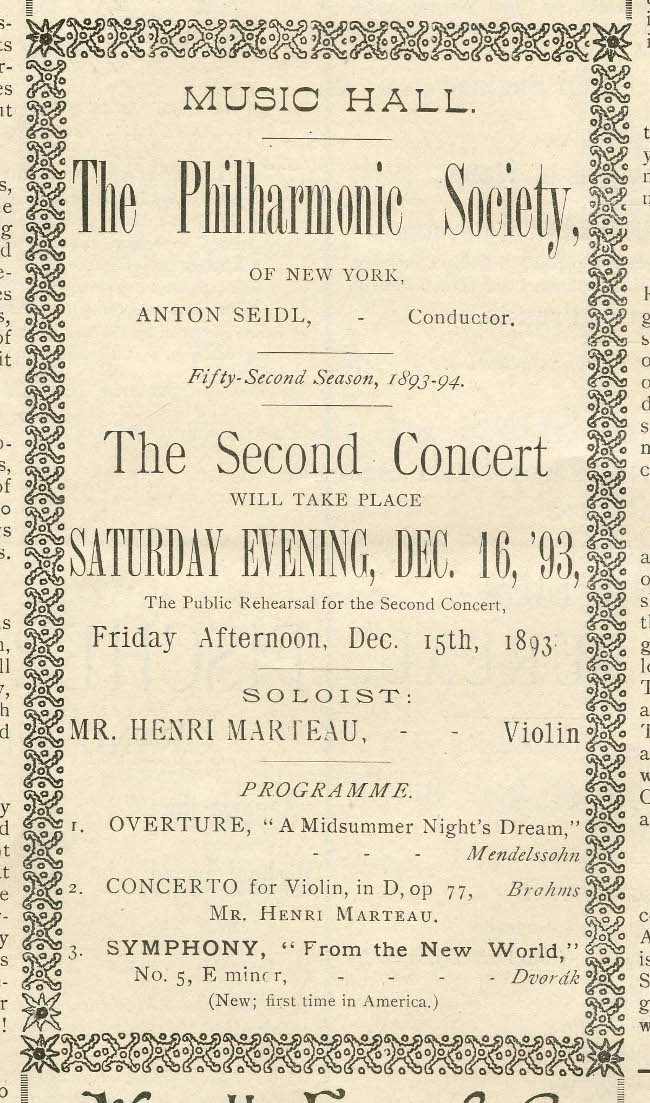 Advertisement for the December 16, 1893, concert which included the world premiere of Dvořák's "New World" Symphony. Courtesy of the Carnegie Hall Archives.

Since its premiere, The "New World" Symphony has been performed in its entirety more than 300 times at Carnegie Hall, the most recent performance taking place in October 2010, when Gustavo Dudamel conducted the Vienna Philharmonic Orchestra.

Excerpt from the score of Dvořák's "New World" Symphony. Courtesy of the Carnegie Hall Archives.

Dudamel returns to Carnegie Hall—this time with the Simón Bolívar Symphony Orchestra of Venezuela as part of Voices from Latin America—while the Vienna Philharmonic Orchestra also return this season for three concerts on March 1, 2, and 3.

Navigate the classic Dvořák's "New World" Symphony with help from Dvořák himself, using excerpts from his letters and instructive comments about his life with this game from Carnegie Hall's Weill Music Institute.