As Women's History Month 2013 draws to a close, Carnegie Hall's Museum Director and Archivist Gino Francesconi recalls the woman without whom the Hall would most likely never have been built.

"I am the unknown wife of a somewhat well-known businessman." —Louise Carnegie, 1895

Andrew Carnegie's most trusted confident was his wife Louise. "I can't imagine myself without Lou's guardianship," he often said. He didn't make one decision without first asking "Lou's" opinion. In her quiet manner, she helped oversee one of the largest fortunes in US history, changing philanthropy forever. But it didn't start off that way. In fact, it almost didn't start at all.

Andrew met Louise Whitfield when he was 45 and she was 23. He was one the most famous bachelors in the US with a value of $20 million ($350 million in today's dollars) and growing. His merged steel companies would become the largest corporation on earth. He had semi-retired and moved from Pittsburgh to New York City, taking a large suite of rooms at the Windsor Hotel for himself and his mother Margaret. She was a formidable woman and Carnegie was devoted to her. While he had seen several women as potential marriage partners, inevitably they all ended the same. Margaret felt there was no woman good enough for her "Andra." Louise would change that, but it took nearly a decade.

Louise Whitfield was born in the Chelsea neighborhood of Manhattan on March, 7, 1857. Her parents, John and Fannie, descended from families that emigrated from England in the 1600s. The Henry Whitfield House in Guilford, Connecticut, is one of the oldest houses in America, dating from 1639—just 19 years after the arrival of the Pilgrims.

Louise's father was a textile merchant. As he prospered he moved the family from Chelsea to Gramercy Park (where one of Louise's playmates would be Teddy Roosevelt) and finally to a comfortable brownstone uptown on West 48 Street and Fifth Avenue—two blocks away from the Windsor Hotel. Andrew met John Whitfield through a mutual friend and enjoyed his company. He made frequent visits to the Whitfield home; during one of those visits, he met Louise. They shared a love of riding horses and he invited her often to Central Park. During these rides, she let it be known she didn't want to marry someone who was already successful, but rather help a husband to succeed. He let it be known that he had no intention of holding on to his fortune, but rather wished to give it all away.

They formed a strong friendship, then romance, and became engaged. Then Margaret stepped in. Louise realized that Andrew would not marry while his mother was alive; four years after their meeting, the engagement was called off. But not the friendship. After nearly a year of corresponding, they decided to renew their engagement, but kept it a secret from Andrew's mother. 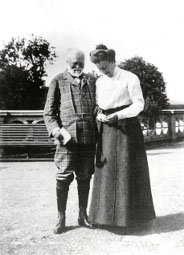 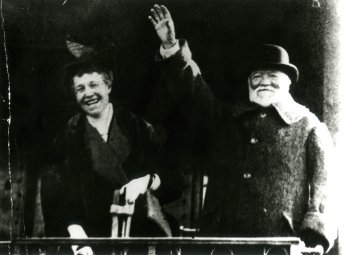 Andrew and Louise Carnegie. Courtesy of the Carnegie Hall Archives.

In the fall of 1886, Andrew contracted typhoid fever; inconceivably a week later, his brother Tom became ill with pneumonia. While Andrew's condition fluctuated, Tom's rapidly deteriorated and he died on October 19 at the age of 43, leaving behind a wife and nine children. Margaret, already ailing, could not bear the news of the illnesses of her two sons and died three weeks later on November 11 at the age of 77. She was not told of Tom's death and Andrew was not told of his mother's death for nearly three weeks until he was fully recovered.

Andrew and Louise were married five months later on April 22, 1887. Unusual for the day, Louise signed a prenuptial agreement, renouncing any claims to Andrew's millions. Andrew in return gave her stocks and bonds, amounting to an independent annual income of $20,000 ($350,000 in today's dollars). They were married quietly in her father's home with 30 friends and family members in attendance. An hour later, they boarded the Fulda for their honeymoon in Great Britain. On board, Louise introduced Andrew to Walter Damrosch, a friend and conductor of the Oratorio Society and the New York Symphony Orchestra. Carnegie Hall lore has Louise singing in the alto section of the Oratorio Society. Damrosch and his father Leopold shared a dream of a concert hall for these two organizations. Andrew was a donor to both organizations. On their Atlantic crossing the idea of what would become Carnegie Hall was born. 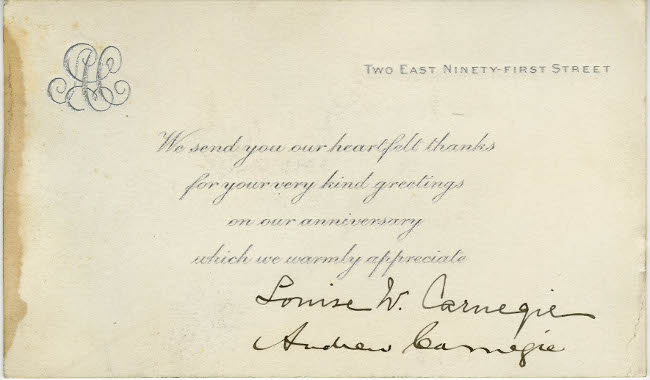 An anniversary greeting thank you card from Andrew and Louise Carnegie. Courtesy of the Carnegie Hall Archives.

Unlike any other Carnegie gift at that time, Andrew did not follow his "Carnegie Formula," which sought other contributors (today's matching gift). Rather, he continued to pay Carnegie Hall's deficits alone until his death in 1919, which speaks more of his love of Louise than his keen business sense.

They were married for 32 years, had one child named Margaret, and Louise was an influential member of the board of The Carnegie Corporation until her death in Manhattan on June 24, 1946, at the age of 89.