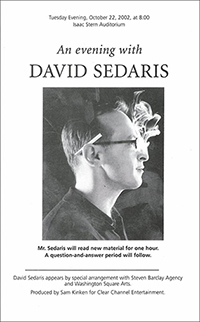 Humorist and best-selling author David Sedaris joined the illustrious group mentioned above with his Carnegie Hall debut, and only performance to date, on October 22, 2002. The recording of that night's performance–David Sedaris Live at Carnegie Hall–received two GRAMMY® award nominations.

We want to take this opportunity to share a bit about two of the many performances that comprise Carnegie Hall's rich comedic history.

The press kit for Andy Kaufman's 1979 Carnegie Hall performance was made with care.