As part of Carnegie Hall’s 125th anniversary season, the Weill Music Institute (WMI) launches The Somewhere Project, a citywide exploration of West Side Story. This creative learning project engages artists and audiences in all five boroughs in a celebration of community and music, encouraging everyone to consider the musical’s timeless themes.

Throughout the season, WMI will also support the creation of new works by students and community members, each inspired by the themes of West Side Story. This original music will be performed by an array of New York City–based artists in free Neighborhood Concerts.

The Somewhere Project culminates in three performances of West Side Story in March at the Knockdown Center, a restored factory in Queens—an immersive production that is equal parts exhibition, theater, and special event. But the real story of West Side Story and its creators, says writer James Jolly, is in the social wounds it can still heal—which is precisely what The Somewhere Project aims to do.

“The radioactive fallout from West Side Story must still be descending on Broadway this morning. Director, choreographer, and idea-man Jerome Robbins has put together, and then blasted apart, the most savage, restless, electrifying dance patterns we’ve been exposed to in a dozen seasons.” Walter Kerr, writing in the New York Herald Tribune on September 27, 1957—the day after its premiere—captured the originality of this now-iconic piece of music theater. (West Side Story ran for 772 performances on Broadway.) Rarely have word, music, and dance fused so perfectly to capture the zeitgeist as in this work by Leonard Bernstein, Stephen Sondheim, Arthur Laurents, and Jerome Robbins.

The idea was first floated in January 1949 by Robbins, who had worked with Bernstein before on Fancy Free and On the Town—both works in which New York City itself takes center stage. He wanted to present an updated version of Shakespeare’s Romeo and Juliet with a book by Laurents. The idea took hold, but the project faltered as each man was pulled in different directions. (In Bernstein’s case, it was the lure of securing a top job as a conductor, something he’d achieve the same year as West Side Story’s Broadway opening when he was named music director of the New York Philharmonic.) When the project returned as a possibility, Sondheim came aboard as librettist. 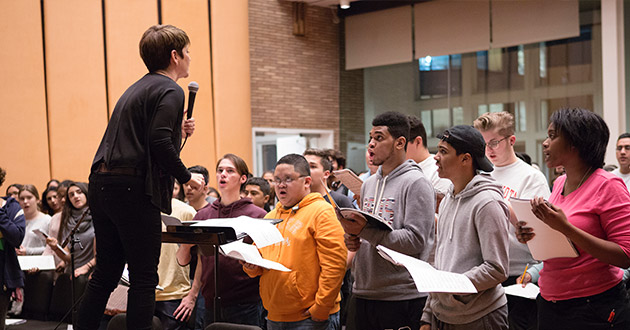 What they wanted to convey was the seething social problems that were bubbling to the surface in postwar America. This was perfectly put by the original Maria, Carol Lawrence: “It was an attack on society. It was attacking gangs and intolerance and bigotry and feuds that meant nothing. And Jerry said the subtext was [that] this kind of bigotry is intolerable. It’s not to be accepted. And this is the only way we can say that forcefully, beautifully, touchingly, movingly, and, hopefully, successfully.” Bernstein, always socially aware, must have been inspired by the fact that this was a show about a new generation and its future; Sondheim, too, was drawn by themes that would later dominate his own music theater works, often with a very dark core. And for Robbins, the raw emotions that West Side Story exposed offered a gateway to a new form of dance.

For conductor Marin Alsop and director Amanda Dehnert, the creative guides of Carnegie Hall’s production of West Side Story that anchors the larger Somewhere Project, that “attack” is as relevant today as it always was. As Alsop says, “The timeless message of West Side Story and the timeless themes of Romeo and Juliet are sadly relevant in our world today. When people cannot pursue reasoning and communication, the results are often tragic. How often is judgment clouded by misunderstandings, irrational preconceptions, and destructive rhetoric? Are the arguments ever worth the lives of our young people? These are questions that we need to ask ourselves, just as Shakespeare asked his readers so many centuries ago. It is long past the time to stop fighting and start respecting and valuing each other.”

“The spirit of The Somewhere Project is about getting everybody together to ask one question:

What do you want the future to be?”

Major works, says Dehnert, “are always about the human universals, the things that people would have understood 200 years ago and will understand 100 years from now, and it’s a mistake to think of these works as pieces of history only, even if the plot might be rooted in a specific time. West Side Story is one of those pieces.

“But for me,” continues Dehnert, “it’s really about how we as a society and as individuals deal with ‘the other’—anything that’s different from what we consider to be ‘us.’ In West Side Story, that’s expressed in the way the Jets relate to the Sharks and the way both gangs relate to law enforcement. And there are always people and groups in life who divide everything into my side and your side, whether that be around gender, sexuality, politics, or race. We do that. It’s one of the most dangerous aspects of human nature, and this musical lets us see the tragic outcomes of that kind of behavior.” 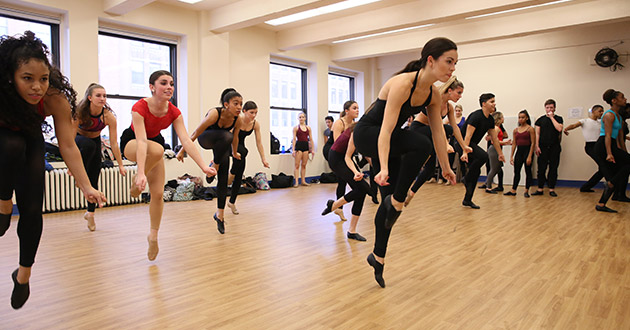 High school dancers begin rehearsal for Carnegie Hall’s production of West Side Story in March 2016. The original choreography by Jerome Robbins is reset by Julio Monge in this production. Additional choreography is by Sean Cheesman. Photography: Richard Termine

Asked how, specifically, she and Alsop will make the show “relevant,” Dehnert reflects, “When something is relevant, you don’t have to work too hard at bringing that out. That might sound coy, but it’s the truth. It’s easy to think that the audience has to have something very carefully explained to them. They don’t.”

For this reason, the cast will be multiracial and multiethnic, and it will be up to the storytelling alone to make clear to which gang a character belongs—not the racebased depiction of many other past productions. (Dehnert relates the sad, frequent tales of actors not deemed to physically look either dark or white enough for previous productions.) If it works, it should make a fitting allegory for the polyethnic world of New York City—or any large Western metropolis—today.

And there’s one more way in which this project diversifies. Under the auspices of the Weill Music Institute, students from across all five boroughs of New York City will join the production amidst their established older colleagues, both on stage and in the 200-voice choir.

“So this event is a celebration of our communities in New York, of the local community in Queens at the reclaimed factory where this production will happen, and of us all,” says Dehnert. “The spirit of The Somewhere Project is about getting everybody together to ask one question: What do you want the future to be?”

Learn more about The Somewhere Project.