To better understand the effect of music in early childhood development, Carnegie Hall commissioned a new research paper from Dr. Dennie Palmer Wolf, an expert in the field. Titled “Why Making Music Matters,” her research points to several key reasons why investing in children early and often is critical to healthy development and a successful future—and that music can play a role in everyday interactions that support our next generation. The following is a summary of Dr. Wolf’s findings. 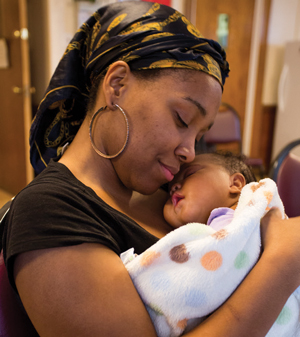 From Carnegie Hall to rural villages in Haiti, the world is discovering how important it is to invest in young children and their families. Ensure their well-being, and down the line, everyone’s mental and physical health, literacy levels, school success, employability, and human relationships improve. The more we learn, the clearer it becomes that live music can play a powerful role in this development from the very start. Studies have found that day-old infants breathe differently depending on whether they are listening to Mozart or Stravinsky, that music soothes premature babies (and their worried parents) in hospital nurseries, and that babies will listen calmly to a lullaby for twice as long as baby talk or adult speech.

Early childhood—from birth to age five—is a remarkable period in human development. At one year old, a baby’s brain is 70 percent of its adult size; at three years, it has reached 85 percent and is already crisscrossed by the connections that provide for human thought and communication. Live music—and the human interaction that accompanies it—is one of the most intense, multi-sensory, and physically involving activities in which young children and their caregivers can engage together.

Making music—especially if it includes tapping, clapping, bouncing, and dancing—can develop fine and large motor control. Even simple games, songs, and back-and-forth play build brain and body coordination. If older children play an instrument, these kinds of growth continue. All this builds important connections across the many regions of the brain needed to carry out the complex actions and interactions humans require in order to thrive.

“The more we learn, the clearer it becomes that live music can play a powerful role in this development from the very start.”

Music also builds intimacy. Young children build some of the most important relationships in their lives as infants and toddlers. If they are lucky enough to have caring and responsive caregivers, they develop a sense of security, the feeling that they will be followed, cared for, and protected, even as they explore new activities, take risks, make mistakes, and recover. Music can support these intimate exchanges. For example, when caregivers sing lullabies, they use pitch, rhythm, and lyrics to soothe, teach language, communicate hope and affection, and provide security as a child goes from wakefulness to sleep, or light to dark. 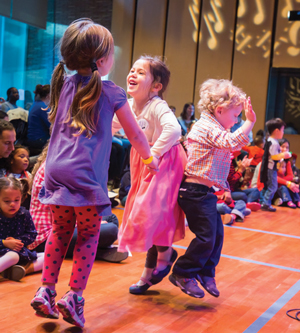 Humans are wired to be sensitive to sound patterns, and this sensitivity allows music to foster communication and imagination in young children. Even before babies talk, their babbling and sound-play helps to develop the neural pathways necessary for listening and speaking. Infants who hear language directed and responsive to them babble more and have larger vocabularies as toddlers. When they hear and see others singing as a part of daily life, young children quickly pick up the habit, using sound to explore new ways to understand or describe the world around them.

These early years are also when children learn how to express and manage their feelings, as well as figure out how to read other people’s expressions and feelings, grasping how other minds work. Through music, children can invent games, songs, and stories that help them harness their feelings. Researchers observing music and movement classes have documented that participation in arts activities correlates with positive emotion for preschoolers and facilitates their ability to regulate their emotions. It may be that experience with musical concepts like stopping/starting, slowing down / speeding up, and verse/chorus provide children with the motivation to direct and modulate their behavior.

These benefits also apply to children’s communications and interactions with others their age. Music, with its tempo and rhythm, verses and choruses, provides clear structures that help children learn the rules and routines for being together. A kindergartener has to watch and listen as she plays a percussion piece with her class; at home, music can be a way to practice cooperation or to connect across generations. Music can also model the structure of social interaction for children with histories of trauma or conditions like autism.

“Music can also model the structure of social interaction for children with histories of trauma or conditions like autism.”

Music can help create community and a sense of belonging, as well. In their earliest years, children learn the languages and accents they hear at home; they absorb the songs and stories of their community, and along with them, beliefs and values.

In the US, one in four children has at least one immigrant parent, and early childhood care and preschools are a key intersection of immigration and education. In these settings, children learn the concepts of belonging and being an outsider. Sound-play and music can create a space in which young children, with the help of families and teachers, knit together new identities that combine their first languages and culture with those of their peers. When daycare and preschools feature the music of multiple cultures and homelands, they model an inclusive and connected world.

Finally, live music is a remarkable carrier of delight and excitement. These and other positive emotions are among humans’ most vital resources: They attract others, lift our mood, and protect us from sadness and even illness. In a world in which families and children experience trauma from violence, war, and natural disasters, music and the other arts can play a powerful role in their healing.