In recognition of Black History Month, the Google Cultural Institute has unveiled an impressive online collection of more than 4,000 items, inviting visitors to explore a range of material covering black history and culture—from organizations and archives large and small—brought together in more than 80 exhibits by 50 partners, including an exhibit created by Carnegie Hall.

From the New Orleans Jazz Orchestra to the historical records of Frederick Douglass and Dr. Martin Luther King Jr. to a Google Expedition exploring the history of jazz in New Orleans with Irvin Mayfield and Soledad O’ Brien, Google’s fascinating and vast collection of digital materials provides unprecedented access to visitors—not only in the month of February, but throughout the year.

Carnegie Hall’s virtual exhibit provides highlights of the rich history of artists and notable figures who have appeared at the Hall throughout its 125 years, incorporating photos, audio, video, and historic materials from Carnegie Hall’s Archives. Gino Francesconi, director of the Hall’s Archives and Rose Museum, narrates videos about soprano Sissieretta Jones, the first African American artist to perform at Carnegie Hall in 1892, and legendary contralto Marian Anderson,who had a 70-year association with the Hall that began with her debut in 1920. The exhibit also includes soprano Jessye Norman introducing Honor! A Celebration of the African American Cultural Legacy, the Carnegie Hall festival she curated in 2009.

Carnegie Hall became a partner of the Google Cultural Institute in 2015. Through the Hall’s new virtual platform, music lovers everywhere can now sit alongside The Philadelphia Orchestra on Carnegie Hall’s stage in a 360-degree video, take a behind-the-scenes Google Street View tour of the landmark building, or browse a variety of other engaging multimedia exhibits, providing a look into one of the greatest concert halls in the world. 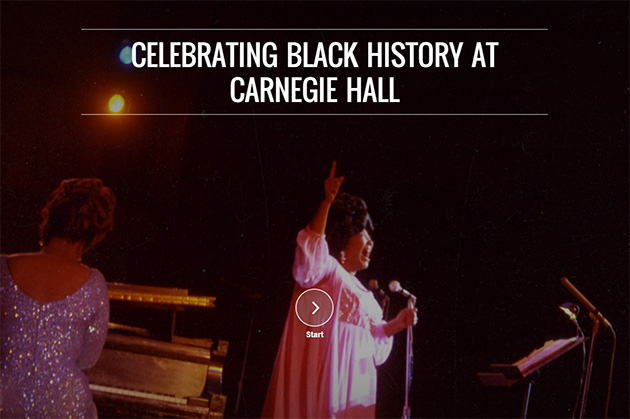