From the opening concert 125 years ago to modern marvels like the YouTube Symphony Orchestra, Carnegie Hall has become an indelible part of the American cultural landscape, the temple on 57th Street and Seventh Avenue that can be reached (according to the old joke) by one word: practice. And as the fact that it has a joke at all suggests, its presence is almost as strong in American pop culture as it is in what we might call high culture.

Even as entertainment options have become more varied for the average American, Carnegie Hall has remained a central image—to borrow a pop culture idea of today, it’s a 125-year-old meme with meaning to many. Just setting foot onto the boards of the hallowed Perelman Stage in Stern Auditorium can represent the start of a great career or the pinnacle of one’s personal achievement.

Pop culture recognizes this, and either doffs its cap or plays around with the idea as the situation demands. After all, even James Bond (not known for having a love of classical music among his many virtues) understood what the blonde Czech cellist in 1987’s The Living Daylights meant when she yearned for Carnegie Hall.

Bond: Your cello’s a Stradivarius!
Kara: A famous one! “The Lady Rose.” Gyorgi got it for me in New York City. Maybe some day I’ll play there ... at Carnegie Hall?

America’s favorite family—the Simpsons, of course—has never visited Carnegie Hall themselves (although the show has had the yellow clan visit New York on three different occasions). However, in the episode “A Fish Called Selma,” washed-up Hollywood actor Troy McClure mentions two B-movies that he was in:

“Hi, I’m Troy McClure. You might remember me from such films as The Greatest Story Ever Hulaed and They Came to Burgle Carnegie Hall.”

Perhaps surprisingly given its provenance, the freewheeling 1948 Leonard Bernstein musical On the Town never mentions Carnegie Hall by name—but it does feature a visit by sailor Gabey (Gene Kelly) to “Music Hall” (incidentally the Hall’s original name) in pursuit of “Miss Turnstiles” (Vera-Ellen), a girl who is taking dance lessons in one of the upstairs studios.

The cream-and-gold interior of Stern Auditorium/Perelman Stage has become instantly recognizable—not just through reputation, but through Hollywood movies, where the collective imagination of screenwriters has made the building into a sort of dream-factory, a place where one’s fondest wishes might come true. And that’s a theme that goes right back to the 1947 film Carnegie Hall, which tells of a pushy parent who wants her boy to become good enough to play there (and he does).

The Carnegie Hall stage has been host to an astonishing variety of performers and performances over the last century. Composers, conductors, and soloists have graced it with their talents. Jazz musicians (Miles Davis, Benny Goodman—part of the pop culture to this day) cut historic live albums there. Rockers and bluesmen, too, have taken advantage of its pristine acoustics with live albums, from Stevie Ray Vaughan and Frank Zappa to Ryan Adams.

Some of the most famous acts to play Carnegie Hall have been stand-up comedians—those bastions, definers, and ridiculers-in-chief of pop culture. Jerry Seinfeld’s TV show never visited the Hall, but the comic has performed there on several occasions. Patton Oswalt gave a notorious concert, during which he and his opening acts broke taboos and barriers in a scathing evening. And Louis C.K. made his 2012 live album Word from a 2010 concert in Stern Auditorium/Perelman Stage.

Classical music and comedy have crossed paths regularly at Carnegie Hall. Sometimes, it was unintentional, like diva Florence Foster Jenkins, fondly immortalized as the world’s worst opera singer. And then there’s Peter Schickele, the Juilliard music professor and composer who made a side career out of playing the “lost” works of P.D.Q. Bach, the (fictional) last and least of Bach’s many children.

Schickele gave a slew of concerts at the Hall, where he and a cast of singers and musicians would play works like the “Bluegrass cantata” Blaues Gras (written for bluegrass band and string orchestra), and pastiche parody operas like The Magic Bassoon and The Abduction of Figaro. Schickele would make crazy entrances to the stage, swinging down from the balcony, racing down the parquet level on a hospital gurney, or simply running in 15 minutes late and out of breath. 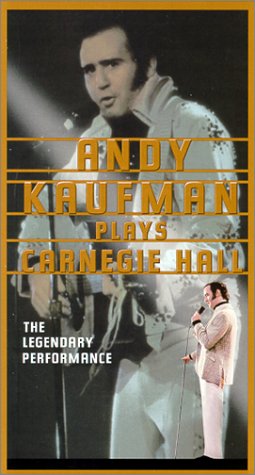 For sheer weirdness though, even the good professor couldn’t beat Andy Kaufman, who shot to fame on television, playing the foreign-born mechanic Latka Gravas on the hit series Taxi. But what he really wanted to do was play a special concert at Carnegie Hall. In April 1979, he got his wish.

Kaufman’s Carnegie Hall show was a circus of the absurd. At its start, an elderly woman was seated on the stage and introduced as the comic’s grandmother (she was later revealed to be Robin Williams in drag). The show included a “resurrection dance” performed in an Indian headdress, wrestling, some children’s songs, and a visit from Santa Claus. At the end of the show, the audience was invited onto 24 buses, taken to a nearby school, and given milk and cookies (an episode memorably captured in the 1999 Jim Carrey biopic Man on the Moon). And what could be better, or more pop culture, than that?

Like Kaufman’s performance, the idea of Carnegie Hall in pop culture transcends its more humble reality—a brick building on a Manhattan street corner, surrounded by looming (and ever-rising) skyscrapers. And for New Yorkers who see the skyline change on what seems like a weekly basis, its landmark status has a welcome ring of permanence: that no matter what happens to the rest of the city, in our reality and in our mythology there will still be Carnegie Hall.