A Day in the Life of Carnegie Hall

There was a sold-out crowd at the National Youth Orchestra of the United States of America’s (NYO-USA) concert at Carnegie Hall last July. By all accounts, the two-hour event was a resounding success. But what did it take to get the Hall ready? Here’s a rare look behind the scenes. 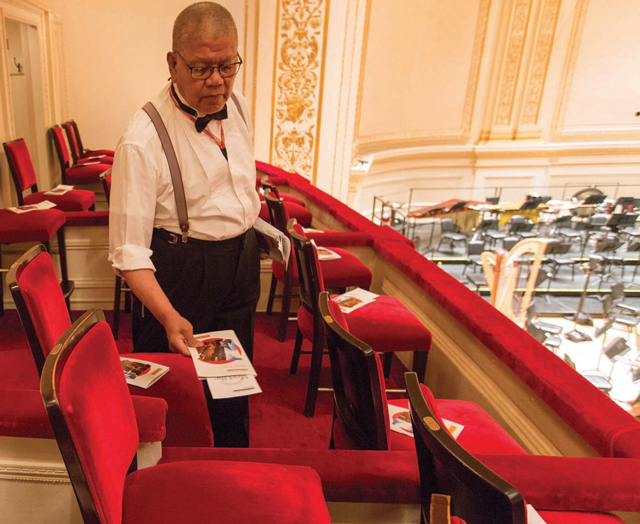 Elsewhere in the Hall, the video team meets to discuss the shots for the night’s live webcast on medici.tv. Camera angles are perfected with a cameraman positioned on the first tier. Along Seventh Avenue, the buses carrying all 114 orchestra members arrive, dropping them off in front of six NYO-USA posters on the side of the building.

The stage is already set as NYO-USA musicians step out into the Hall for the very first time. Several bass players try to squeeze in one more sectional rehearsal, and the Hall erupts with dissonant fanfare as musicians warm up their fingers before conductor Charles Dutoit steps onto the podium to begin rehearsal.

Wonderstruck, many of these young musicians experience the Hall for the first time and can’t resist jumping up onto the podium to snap quick photos to share with family and friends.

As concert time approaches, ushers gather to discuss their stations for the evening while concertgoers pick up tickets from the box office. Once the house is open, everyone makes their way up the stairs before going in to find their seats.

Backstage the orchestra members are dressed and the instruments are tuned. Some musicians meditate quietly as others drill their scales among the pillars of instrument cases stacked along the walls. Minutes to showtime, the musicians board the elevator that will take them to the stage. While the lights dim and the Hall falls silent inside, outside the poster for that evening’s event is already being replaced with one for the next concert on the calendar.

The audience is still cheering as the orchestra exits the stage. Backstage is a buzz of celebration with hugs, happy tears, and flowers. Members of the orchestra line up to sign a card commemorating their Carnegie Hall debut. Maestro Dutoit steps to the side for a radio interview, offering his post-concert reflections. As the audience empties out of the Hall and musicians gradually exit out of the backstage door, stagehands clear the chairs and music stands, leaving Stern Auditorium/Perelman Stage quiet once again. After all, who knows what tomorrow will bring?

All photos by Richard Termine