A Carnegie Hall trustee since 2014, Len Blavatnik has been a major supporter of Carnegie Hall for more than ten years, and a Founding Patron of the National Youth Orchestra of the United States of America, a program created by Carnegie Hall’s Weill Music Institute in 2013.

The Blavatnik Family Foundation’s $25 million commitment to Carnegie Hall’s ongoing 125th Anniversary campaign will fund the continued growth of the Hall’s artistic, educational, and digital initiatives as they are expanded over the next decade. Other key supporters of this campaign include the Fund II Foundation, founded and led by Carnegie Hall Chairman Robert F. Smith, as well as trustees Beatrice Santo Domingo and Nicola Bulgari.

The newly-named Blavatnik Family First Tier in Carnegie Hall’s Stern Auditorium / Perelman Stage will be unveiled with a pre-concert celebration at Carnegie Hall’s Opening Night Gala on Thursday, October 6, a festive evening featuring a performance by Gustavo Dudamel and the Simón Bolívar Symphony Orchestra of Venezuela. The tier will hold this special name and designation for the next fifty years. 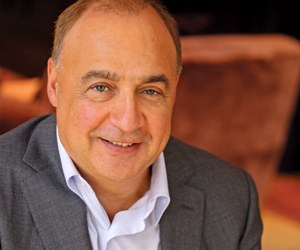 “Carnegie Hall is the world’s premier music destination, the place where all of the finest artists have aspired to perform. It is important to me and my family that the Hall continue to thrive, bringing together artists and audiences for exceptional musical experiences and creating programs to engage and inspire the next generation of musicians and music lovers. We are proud to support Carnegie Hall as it enters its next 125 years.”
—Len Blavatnik

“On behalf of Carnegie Hall’s trustees,” says Robert F. Smith, Chairman of Carnegie Hall’s Board of Trustees,“it is my pleasure to thank Len Blavatnik and the Blavatnik Family Foundation for this important gift, one that provides strong momentum to our anniversary campaign, ensuring a vibrant, enduring future for Carnegie Hall. We greatly appreciate Len’s leadership and his deep commitment to our institution.”

Clive Gillinson, Carnegie Hall’s Executive and Artistic Director, said, “Music means a lot to Len’s family and we know that Carnegie Hall has always held a special place in his heart. We are immensely grateful for his shared belief in the transformational role that Carnegie Hall can play in serving today’s artists and audiences, advancing the future of music. This gift will have a significant impact on our work, enabling us to greatly expand on our focus in recent years: creating artistic programming of the highest quality, developing innovative education programs that engage people from all walks of life; and leveraging technology in ways that make Carnegie Hall even more accessible to audiences around the world.”

Len Blavatnik, a major American industrialist and philanthropist, is the founder and chairman of Access Industries, Inc., a privately-held US industrial group with global strategic investments in four key sectors: natural resources and chemicals; media and telecommunications; technology and e-commerce; and real estate. Raised in Russia, Mr. Blavatnik immigrated to the US in 1978 and became a US citizen in 1984. He studied in Moscow as an undergraduate and later received his master’s degree in computer science from Columbia University and an MBA from Harvard Business School. He sits on various corporate boards, among them Warner Music Group, which is wholly-owned by Access and is the sponsor of the Warner Music Prize, recognizing exceptional young classical musicians. Mr. Blavatnik also sits on boards at Oxford, Cambridge, Harvard, and Tel Aviv universities and numerous charitable organizations including The Mariinsky Foundation of America. Mr. Blavatnik and the Blavatnik Family Foundation have supported many leading educational, cultural, and scientific institutions in the US, Europe, Russia, and Israel, including the founding of the Blavatnik School of Government at the University of Oxford. In 2007, Mr. Blavatnik, together with the New York Academy of Sciences, established the annual Blavatnik National Awards for Young Scientists to celebrate noteworthy young scientists and engineers and to recognize highly innovative and interdisciplinary scientific accomplishments.