Since Carnegie Hall opened in 1891, its story has been synonymous with the history of music and performance in America. Through 126 years of concert programs; promotional flyers; select audio, video, and film recordings; photographs; autographs; musical manuscripts; correspondence and business records; and architectural drawings, objects, and other materials detailing the origins, activities, and growth of Carnegie Hall, this fascinating story is brought to life today through the collections of Carnegie Hall’s Archives.

Concerts at Carnegie Hall—Michael Rabin, 1955 is a promotional film made by documentary filmmaker Robert Snyder (1916–2004) for the Carnegie Hall Films company. In the 13-minute program, violinist Michael Rabin performs music by Schubert, Brahms, and Paganini onstage in the Main Hall (today’s Stern Auditorium / Perelman Stage). Rabin was a child prodigy who died at the early age of 35. The film provides a rare opportunity to see and hear this brilliant performer, collaborating with pianist David Garvey.

Other Snyder films in the Carnegie Hall Films collection feature mezzo-soprano Jennie Tourel, harpsichordist Ralph Kirkpatrick, and pianist Claudio Arrau. As part of the Archives ongoing digitization initiative, these films and other material related to Carnegie Hall’s 126-year history are available to the public for in-person research by appointment. In the future, many of these items will be available online as part of the Digital Collections. Currently, more than 45,000 events can be accessed through our online Performance History Search.

Preservation of the Rabin film was a collaborative effort between the Carnegie Hall Archives and the Museum of Modern Art (MoMA) Department of Film, with MoMA providing the film reel that was eventually selected for transfer and digitization. In the summer of 2009, we contacted the Academy Film Archive (AFA), where Snyder’s collection is housed. At that time, we learned that AFA had an incomplete selection of the Carnegie Hall Films and that MoMA had the full collection. We worked with MoMA to evaluate and select appropriate materials for reformatting and digitization.

The original and new physical film elements from the Carnegie Hall Films collection will be on deposit at AFA, which holds Snyder’s materials in its Masters & Masterworks Collection, named after Snyder’s production company. AFA holds almost 200,000 items and has storage optimized to dramatically slow motion picture film deterioration. This repository was selected because, while Carnegie Hall’s offsite storage vaults are climate-controlled and maintain a temperature between 68 and 70 degrees Fahrenheit and relative humidity (rh) between 45 and 55%, these are not optimal conditions for the storage of audiovisual materials—especially our small collection of film, which should be stored closer to the range of 36°F at 50% rh and 45°F at 30% rh.

The collaborative effort between Carnegie Hall, MoMA, and AFA enables us to preserve and make available this tremendous glimpse of Rabin as a teenager. The film awards us insight into his various techniques up close—an opportunity we wouldn’t have had even if we could have seen him and Garvey perform in the live concert. As a historical document, the film captures what the Hall looked and sounded like in the early 1950s. Since we have very little moving image material prior to 1960, recordings like these are incredibly valuable to our institution and researchers.

There is both analog video and motion picture film material related to Rabin’s performance in the promotional film. In addition to VHS and ¾" U-matic tapes (videotape copies created from the 1" open reel video in the early 1990s), the Carnegie Hall Archives had motion picture film elements that went through a condition assessment at the beginning of this extensive project to determine their eligibility for digitization: 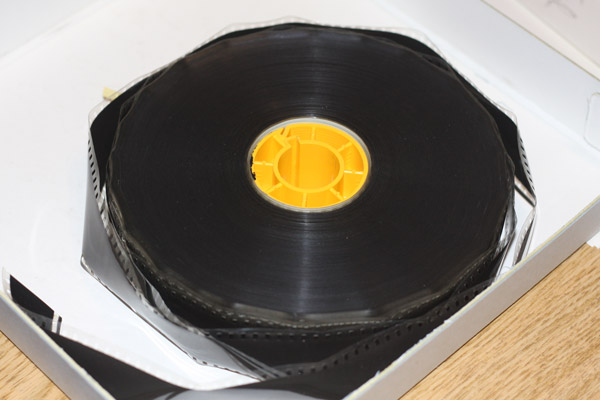 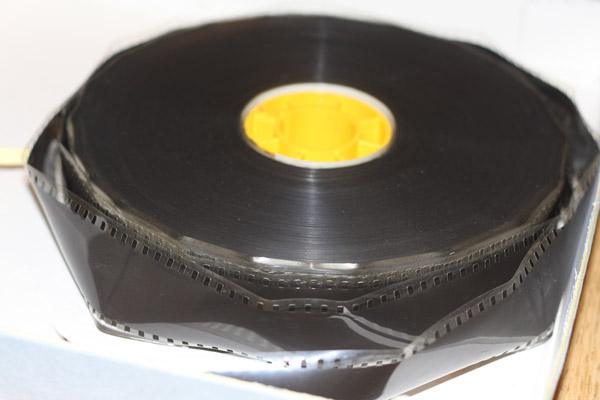 Pictured above: A reel of deteriorating acetate negative on a core from the Michael Rabin promotional film (2011).

Pictured above is one of the negative optical soundtracks on Dupont film stock exhibiting signs of twisting, curling, and high shrinkage that results from extreme acetate film deterioration. This type of deterioration is a form of chemical decay, commonly known as “vinegar syndrome” because of the pungent vinegar smell of the film as it breaks down. It is also “contagious”—vinegar syndrome is aggravated by heat and moisture, and can be exacerbated by the “presence of acidic vapors from film degrading nearby.” This reel was quarantined from the other film elements in the collection, as vinegar syndrome cannot be reversed (although it can be slowed down by proper storage, handling, and rehousing to archival cans that allow adequate airflow).

The other reel of negative optical soundtrack was also on Dupont stock and was in better condition (no extreme shrinkage or curling), but was in the category of rapid/active decay due to vinegar syndrome—which was determined using special indicator strips to measure acetic acid off-gassing. The negative, image-only reel was on Eastman Kodak film stock (from 1953, according to its edge code) in fair condition with some broken film cement splices. The image-only reel was also missing the second half of Rabin and Garvey’s performance.

Because of the condition and missing footage in the three reels in the Carnegie Hall Archives, MoMA generously provided a 35mm acetate “answer print” from its collection to be transferred and digitized. An answer print is the version created as intended for release, with image and sound synced, corrected exposure and color; this print was in “great shape,” according to the film transfer technicians in 2013. The reel, MoMA #6957, had the full 13-minute performance with full visuals and sound.

Film preservation activities of this material took place at ColorLab in Rockville, Maryland. In 2014, MoMA’s answer print was transferred using contact printing with a wet-gate (a chemical bath that temporarily minimizes the effects of scratched film as the image is transferred), after projector oil and other residue was removed during ultrasonic cleaning, and the film reel was inspected, repaired, measured, and had new leader added in preparation for transfer.

To create digital copies for Carnegie Hall’s Digital Collections, ColorLab performed a 2K telecine transfer (a process where the motion picture film is captured as digital video). The result was a stack or series of DPX files, which are individual image files that capture each frame of a motion picture film. When combined, DPX files represent the film content as digital video sequences and can be transcoded to create smaller, viewable versions for access.

The decision to both physically and digitally preserve this material aligns with our commitment to preservation as a process rather than a single activity. The long-term perspective enables the Carnegie Hall Archives to constantly and consistently review and revise our preservation practices, which include everything from storage infrastructure (how and where assets and information are stored, managed, and organized) to metadata management (how information about materials is captured, improved, and kept meaningful). Our goal is to sustain access to cultural heritage material, like this short film from the 1950s, so that many generations can explore, interpret, and enjoy our shared musical history.