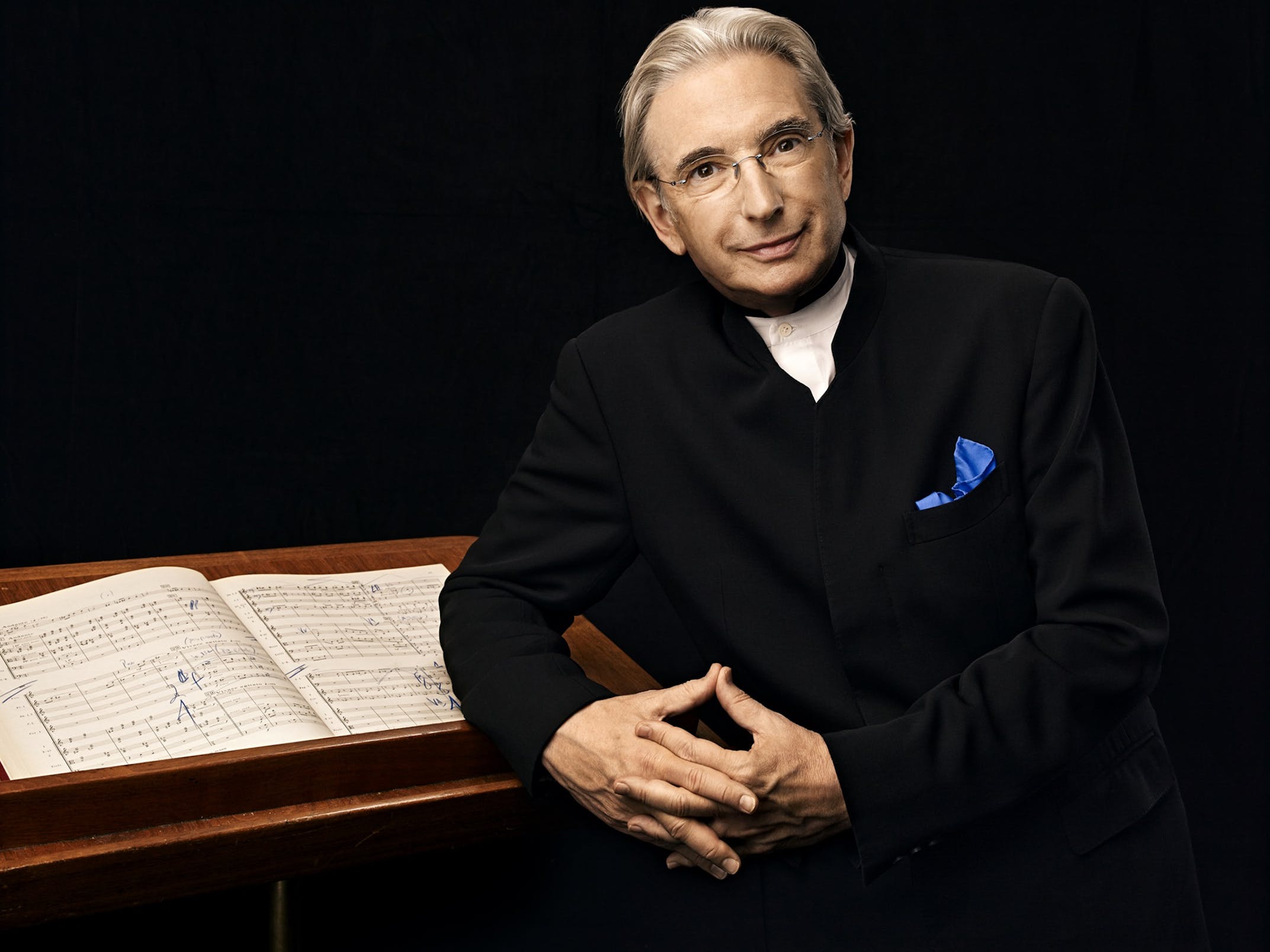 After leading Carnegie Hall’s National Youth Orchestra of the United States of America on tour to Asia this past summer, Michael Tilson Thomas returns to the Hall for his second Perspectives series, highlighting many facets of his renowned career. Since his 1995 appointment as music director of the San Francisco Symphony, he has taken the orchestra to glorious heights, premiering new music, invigorating familiar works, and launching multimedia initiatives. And as a music educator, he has shared his passion by founding the New World Symphony, an orchestral academy for graduates of prestigious music programs. In a recent interview with Jeremy Geffen, Carnegie Hall’s senior director and artistic adviser, Tilson Thomas discussed the musical interests and philosophies that continue to inspire him, providing a foundation for his latest Perspectives series.

You’re about to embark on your second Perspectives series, which allows artists a canvas on which to paint as broad a portrait of themselves as they would like. This season, you’ve curated six performances that reveal a lot about you and your artistic relationships.

There are a lot of confluences throughout the series, but particularly in the opening night concert when I return to music by George Gershwin. My father knew Gershwin as a lad and credited George with being his first piano teacher. George would walk by and give him little pointers, as my dad was playing in his own particular Tin Pan Alley style. That whole delicious, achy Tin Pan Alley kind of language was something that I probably knew before I could even talk. There is that special, sophisticated ache in all of Gershwin’s music, which now is becoming more focused than ever in that the critical edition of his work is being performed. Lots of the layers added over the years by very well-meaning film composers—with the objective of making the music seem more lush—have gone away. Now we can really hear how deftly, how particularly, Gershwin was writing for orchestra. He was really wanting to write classical pieces like Ravel, like Debussy, but that had this special, beautiful twang of what it meant to him to be an American, to be a New Yorker. I’m also joined in this concert by two of my dearest friends: Renée Fleming and Audra McDonald. It’s thrilling for me have this lifelong connection with these two great artists who bring individual spark and electricity to so much music.

The next evening’s program is devoted to works by a composer you knew well, Stravinsky.

I grew up in Los Angeles, where I saw Stravinsky conduct for the first time when I was 10 or 11. I began attending rehearsals of his music and definitely had this wonderful experience of hearing him sing and demonstrate—in his own particular kind of fractured solfège—exactly the way he thought the music should go. Hearing the music sung in the composer’s own voice is something that gives you a perspective that can come from no other, no matter how precisely it may be notated on the page.

You return in the spring for concerts with the Vienna Philharmonic Orchestra.

In March, I have two concerts with the Vienna Philharmonic, which focus very much on the orchestra’s core repertoire, as well as one interesting surprise: They asked me specifically if I would do a piece by Charles Ives. From time to time, I have done American music with them and have always enjoyed this process of bridging this music with their unique way of playing. It’s a fascinating experience—it starts to have little lilts, little phrases that are uniquely Viennese. One of the programs is devoted to Mahler’s Ninth Symphony, which was, interestingly, the first Mahler symphony I ever conducted and a piece that has been right at the center of my worldview for a long time. I think the lyricism of the piece—the big, generous unfolding of its grand design based so much on how personal, how vulnerable, how particularly inflected so many little personal moments along the way can be … To let all those things happen, to encourage a collaborative way of doing that with members of a great orchestra and, at the same time, shaping the big design, that’s what I’ve spent my life doing.

Your final pair of Perspectives concerts are with the New World Symphony. Can you talk about the concept behind the ensemble and how it has grown?

I feel a very special pride and affection for this ensemble because it is one that I founded back in 1988. The New World Symphony was created to be a place for these wonderful young musicians to be able to hone their talents to the sharpest edge, to be able to launch their careers in new and original ways, and to understand what the possibilities of technology would be in bringing music out into the world. My involvement working with young musicians has been one of the great joys, great treasures of my life. I’m so happy to say that all these years later, the fellows of the program have gone on to be outstanding soloists in major orchestras and chamber ensembles around the world, and they’ve become very influential figures in educational projects and in the development of new technological frontiers for the direction of our profession. The New World Symphony is like the research-and-development arm of classical music. I think it’s also a place where we work a lot on the concept of how musicians can be not only wonderful performers, but also contributors to the society from which they’re coming—being creative members of a community. I think that shows in the way they play music.

In your second performance with the New World Symphony, you feature Schubert’s “Death and the Maiden” Quartet, as transcribed for string orchestra by Mahler—an arrangement you have championed for many years.

This is a project that Mahler only partially completed, and I have spent some years carrying it forward. It presents a very beautiful view of the piece, which allows the intimacy of the original to be present and also permits the music to expand to the kind of remarkable dimension that it has. For me, Schubert has become more and more an essential composer over the years. Without Schubert, there is no Mahler. There is no Berg. There is no continuous line of what we think of as being some of the most beautiful and affecting music there is. I think about all these great masterpieces as being like national parks. We revisit them at different times in our lives, and we revisit them in the company of different people.

Also joining you and the New World Symphony is this season’s other Perspectives artist, pianist Yuja Wang. What was your first impression when you met her as a young musician?

I first met Yuja when she was maybe 16. Unlike so many young artists who show up with their parents, their teachers, their managers, and their coaches, she just appeared: “Hi, I’m Yuja. I’m here. What are we doing?” It was that direct communication and the really very open, curious mind that she has—to want to see and understand more of what’s happening deep down inside the music—that drew me to her. Over the years, we’ve learned a lot of pieces together, and it’s always a very beautiful process.

You’ve been with the San Francisco Symphony since 1995 and have together developed a shared language and trust. How do you keep things developing in the right way?

Because I come from a theatrical family rather than a musical family, my perspective on performance may be a little bit different. I know that no director, in working with a great actor, would say, “You know, say those first three words loud, then pause; say the next five, maybe, a little bit slower; and then follow me when I do this or that.” No! That’s because the actor must become the character he is playing. The whole art of the director is to encourage that, so it seems authentic and totally believable what that actor is doing. It’s the same—working with a great oboist or violinist or great viola section—that you’re trying to develop their perspective, to take the strengths that are already there and present a new direction, a new possibility that they could explore, a new level of wit or excitement or tenderness. This way of working has been at the heart of the way I’ve worked with the San Francisco Symphony over these past 20 years or more, and it’s the way I’ve worked with the London Symphony over the past 40 years, and the New World Symphony over the past 30 years. I tend to find groups of people and stick with them and build the relationship over a long period of time so that there’s a lot of mutual understanding. We can make things happen in a very personal way that doesn’t really sound like anybody’s reading the music or following any instructions—it seems like the music is just spontaneously coming into being.