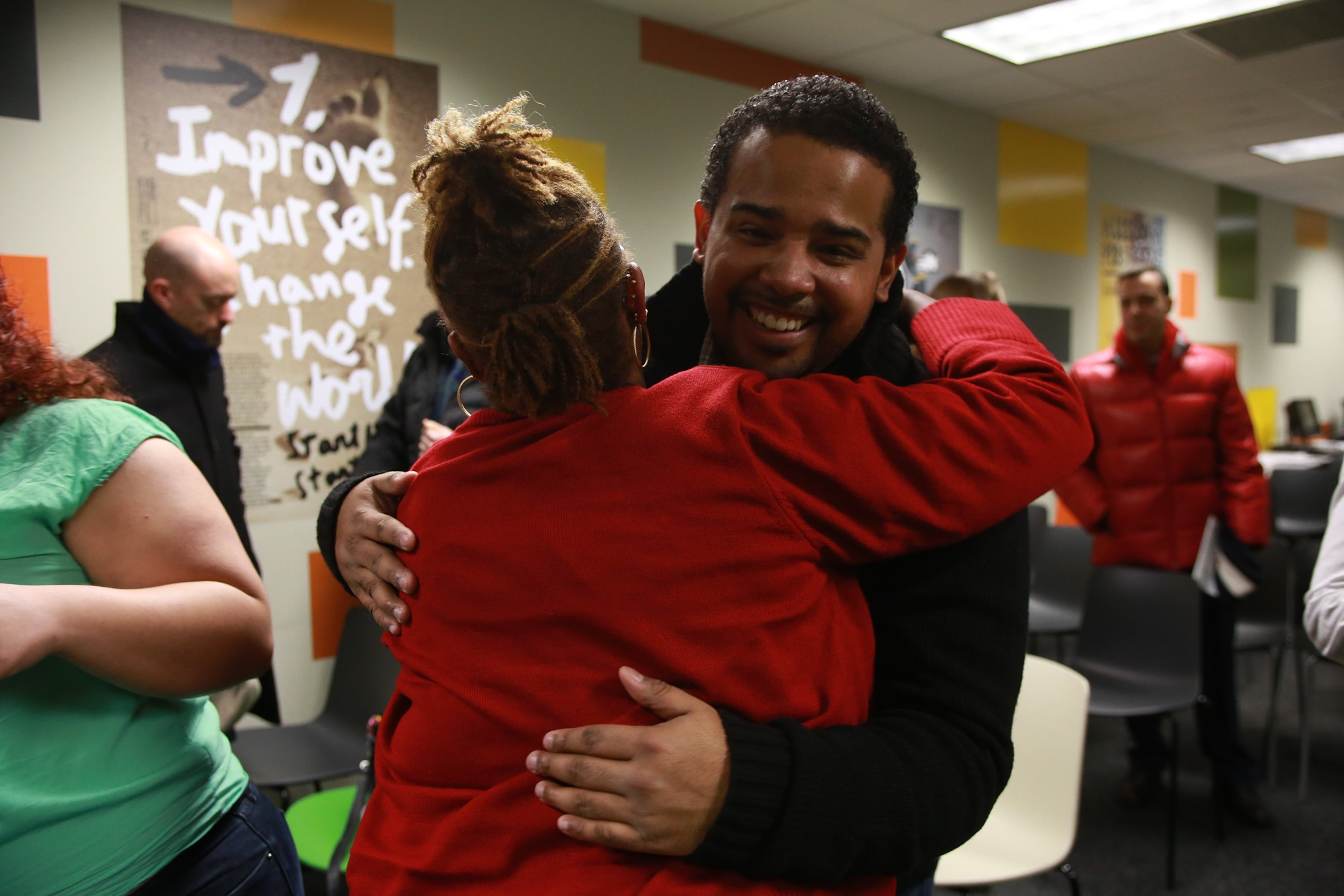 Like hundreds of others who cycle in and out of Neighborhood Opportunity Networks—or NeONs, community-based centers in seven New York City neighborhoods where large concentrations of people on probation reside—Napoleon Felipe didn’t know what to expect from the experience.

The South Bronx NeON waiting room was the last place Felipe thought he would reconnect with his love for writing, but that’s exactly what happened.

Inspired by his grandfather’s love of history’s distinguished people, Felipe’s father named him after Napoleon Bonaparte. Still, Felipe didn’t imagine for himself a future that matched the import of his namesake.

“Not to sound like a sobby kind of guy or anything like that,” he says, in the now colorful renovated Bronx NeON at East 161st Street. “It was hard for me to fathom being anywhere great. I would try to, but I just didn’t think I would amount to anything. I found a job and became a dad, and that was hard … I thought that would be my life—with dreams of being great and having the potential for greatness, but never really being great.”

Life intervened. During one visit to the Bronx NeON in 2012 as he was working toward finishing his General Equivalency Diploma, Felipe met Dave Johnson, a disarming and accomplished poetry professor. Johnson is the founder and leader of Free Verse, a creative writing workshop offered in NeONs throughout the city with aspirations to turn waiting time into creative time. It is one of several programs supported by NeON Arts, which brings free arts programming to young New Yorkers across the city. This partnership between the NYC Department of Probation and Carnegie Hall’s Weill Music Institute supports artists and arts organizations who partner with NeON communities to produce projects that help young people develop creative, social, and emotional skills.

Johnson approached Felipe, who sized up Johnson’s colorful flyers and journal-like book quickly, and dismissed him just as fast. “I had no care in the world for it,” he admits. “He talks to me about writing poetry and I’m like, ‘I’m not interested in writing poetry. It does nothing. Poetry sucks.’ He then says, ‘What do you mean it sucks? Write down how you feel.’”

So Felipe did. And he found something interesting. “It reminded me of how I used to feel when I would journal in my composition notebook as a kid. It felt like, ‘This is what I need to come back to, this is where I need to be.’ So I started writing my feelings out and it became a therapeutic thing. It was a reflection.”

Once Felipe started writing with Free Verse, he couldn’t stop. He showed up every Tuesday and Wednesday that Johnson was there, then Thursdays. “Listening to poetry and getting that wisdom started telling me that I belong here. It looks like the enemy, but it’s not. It started some healing, in a sense.”

His passion was infectious and he recruited others to join. He became one of a few apprentices with Free Verse. “About six years later, here we are.”

Because of his dedication, Felipe was selected to participate in a summer intensive in Florence, Italy, with the Open Program, a theater initiative that travels the world. His invitation there, like his progress as a poet, has put him on an addictive path to greatness—not just for himself, but to help others. Now in addition to teaching at Free Verse, he’s helping to develop a fellowship through the Open Program so other writers affiliated with Free Verse can go to Italy, too.

He’s also learned, he said, the power of believing in the kind of greatness that awaits you if you say yes to something unfamiliar. He took the plunge with Free Verse initially “to prove that I wasn’t a nobody, and to prove to people who walked out on me that I could be something. And that mistakes actually make you better. It’s like knowing you have the cure and injecting yourself with it. Now I’m in a different state of mind.”

He continues: “The difference between me and someone who doesn’t want to change is that they haven’t tasted the fruit of success—they don’t have the support. But I hope that when they walk through that door, we become that support for them. And that person walks out of here changed.”

His changed mindset started with Free Verse, “working with people who saw a better me, and helping me unravel that. There’s an energy out there—whether you call it God or something else—that has been calling me to do this for a long time.”

A Time Like This: Music for Change by Richard Termine