Carnegie Hall’s goal was ambitious: to bring 125 new pieces of music into the world in just five short years. Starting in 2015 (to coincide with the Hall’s 125th anniversary), it had an innocuous name—the 125 Commissions Project—but, still, how could any single organization fund, schedule, promote, and present what amounts to an entirely new repertoire of music?

Then the music began to arrive—from professionals, students, and amateurs. Works by 70-something mavericks and 20-something newbies. Musical stories about Baltimore and Melbourne and Tehran and Washington and Paris. Some were smooth and radiant, others were percussive and experimental, written for full orchestra or solo voice, for violin or oud, for bayan or loudspeaker-dress. Some have been crowned with standing ovations, others have received polite applause. Some have entered the repertoire, others are waiting for their next incarnation.

As the 125 Commissions Project enters its final months, one of the remaining works is Michael Gordon’s Travel Guide to Nicaragua, which receives its New York premiere in a performance by The Crossing and boundary-destroying cellist Maya Beiser.

Now, The Crossing is no ordinary chamber choir. One might expect certain things of a choral performance: heavenly sounds written long ago performed far away in a church. But this group turns those expectations on their head, aiming directly for the audience’s collective solar plexus, telling stories of today.

Founded by a group of friends in 2005, The Crossing has burst onto the national stage in recent years. The ensemble won Grammy Awards in 2018 and 2019, and was nominated in no fewer than three categories this year.

A search for directness brought The Crossing to the door of composer Michael Gordon, one of the founders of the Bang on a Can collective who began outside the classical mainstream, creating pulsing sound-walls, piling layer on layer of amplified instruments. Choirs stayed away from Gordon’s music, perhaps fearing the energy, those rhythms, that complexity. But then Francisco J. Núñez, fearless director of the Young People’s Chorus of New York City, approached him.

Núñez wanted “something in the vernacular,” says Gordon, “something the young singers, who came from all over the city, could relate to.”He turned out music that set some out-of-left-field texts: a list of the names of all the stops on the F-train, a website detailing the great trees of New York City.

“The pieces got more personal,” says Gordon. “After writing these short pieces about the city, I thought, I’m going to write a piece about my street.” This work, Anonymous Man (written for Nally and The Crossing), “is based partly on the history of my street and two homeless men who have lived outside on the street.”

For Nally, Gordon’s personal approach removed the distance between creator and audience. In a Schubert song, he says, “a poet is writing about a woman on the next hill. You have the woman, the poet writing about her, the composer setting that poem, and eventually me singing it. Six degrees later,” he laughs, “I’m singing about that woman.”

With Gordon’s music there is no gap. “You have Michael—Michael setting his own words about his own life, and us singing his words. The degree of separation is very small.”

Gordon’s new work for The Crossing and Beiser is particularly personal. Gordon grew up in Nicaragua, the son of an immigrant from Poland. The story of his father’s journey is too-crazy-to-be-true: abandoned at age 12 first by his mother and then by his father, he eventually follows them to Nicaragua.

Travel Guide to Nicaragua is partly about his father’s journey and partly about Gordon’s own impressions of the country as a child. Gordon also weaves history among these reminiscences: He tells a story of Nicaraguan poet Rubén Darío, who traded a glass of scotch for his most famous poem.

The work is also about memory.“Everyone remembers these stories differently,” says Gordon. “I ask my sister, she has one version of the story. I ask my cousin, he has another version. That’s also a theme throughout this piece: our relationship to memory.”

Travel Guide is the second hourlong work that Nally has commissioned from Gordon. Nally found the choral repertoire littered with short pieces, and he and The Crossing saw a chance to develop a repertoire of works that told stories on a much larger scale. “It’s what we think we can contribute to the Western canon.”

Nally says that Gordon brings a unique voice to the choral world. The rhythmic energy of Gordon’s music is thrilling, he says, but very challenging. Gordon, “either through genius or naiveté,” piles melody on top of melody, but never in an expected way. “It can be very hard,” Nally laughs.“He doesn’t take any prisoners!”

That take-no-prisoners approach is emblematic of the 125 Commissions Project as a whole. To put so many untested hours of music onstage carries a certain danger. What if the audience doesn’t respond positively? Or what if—like when Stravinsky’s The Rite of Spring was premiered in 1913—people even start to riot?

But the risk of not doing it is perhaps far more dangerous. “The tradition of concert music will die and petrify,” says composer Steve Mackey—whose Through Your Fingers was premiered in 2017 as part of the project—“if it’s not constantly being renewed.”

Ultimately, that is what the125 Commissions Project has done. It has supported musicians from around the globe as they water artistic seedlings, hoping that something new and beautiful will grow, enriching our musical ecosystem. 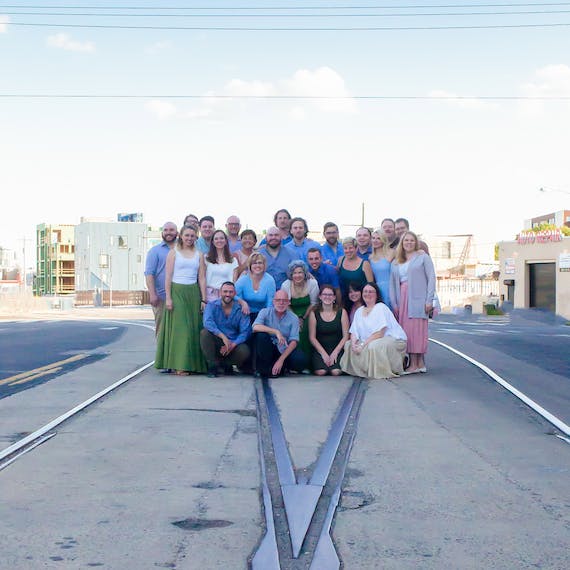