Billie Holiday’s famous back-to-back concerts on November 10, 1956, began at the beginning: “Mom and Pop were just a couple of kids when they got married. He was 18, she was 16, and I was three.”

Narrating from the stage between songs, Gilbert Millstein of The New York Times read excerpts from Holiday’s recently published autobiography, Lady Sings the Blues. The unpolished prose describes moments from a childhood listening to Louis Armstrong and Bessie Smith in the brothel where she ran errands, to her arrest in 1947 and the Carnegie Hall concert she gave just 10 days after her release. Although the book was ghost-written (and suspected to have been a less-than-perfect representation of Holiday’s experiences), the vignettes create a sharp and theatrical self-portrait when paired with her singing, the bluntness and bygone innocence of her story mirrored in her voice. Reviewer Nat Hentoff, who was in attendance, described her sound as “almost unbearably wise in disillusion and yet still childlike.”

Although Holiday cut a striking figure on stage, she was in the final, sordid chapter of a tumultuous life of addiction—the concerts took place less than three years before her early death at the age of 44. Millstein, who wrote liner notes for the live recording, recalls that “it was evident, even then, that Miss Holiday was ill. I was shocked at her physical weakness. Her rehearsal had been desultory; her voice sounded tinny and trailed off; her body sagged tiredly. But I will not forget the metamorphosis that night … She was erect and beautiful; poised and smiling. And when the first section of narration was ended, she sang—with strength undiminished—with all of the art that was hers.”

The first song she sang that night was “Lady Sings the Blues,” and it serves as a poignant introduction to an evening immersed in her autobiography—an opening that sounds like a closing:

Lady sings the blues,
She tells her side,
Nothing to hide.
Now the world will know
Just what her blues is all about.

Hentoff described the remarkable welcome and sendoff she was given during the midnight concert, one of the last of the 23 performances she gave at Carnegie Hall in her lifetime: “The audience was hers from before she sang, greeting her and saying goodbye with heavy, loving applause. And at one time, the musicians too applauded. It was a night when Billie was on top, undeniably the best and most honest jazz singer alive.” 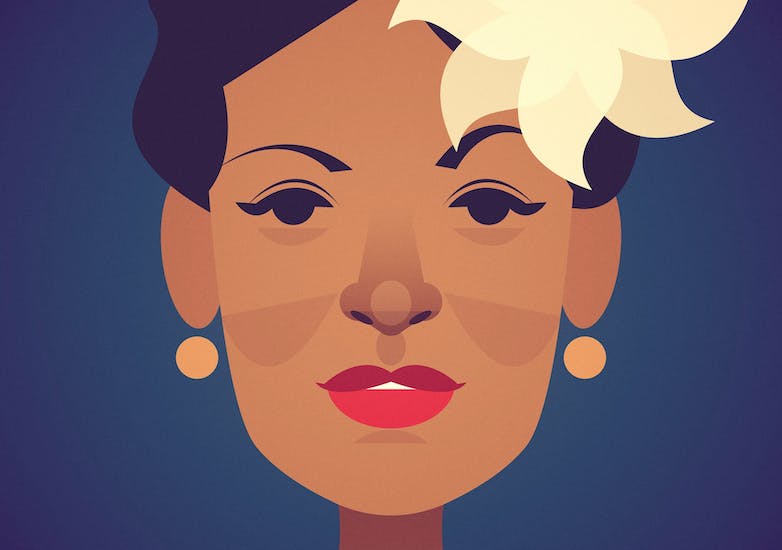 Learn more about Billie Holiday and other Carnegie Hall icons.