Revered for her impeccable technique and insightful artistry, pianist Yuja Wang is a phenomenon of the classical music world. Her regular appearances at Carnegie Hall—elegant, exuberant, stylish—send critics rushing to find precisely the right adjectives for her playing. “Granitic and gauzy to eerily brilliant,” raved The New York Times following a 2013 recital. “Clear, chaste, and feather-light,” ventured The Washington Post. “In all seriousness,” wondered the Times following another concert in 2019, “What can’t Yuja Wang do?”

Yuja has performed more than two dozen times at the New York venue, even reopening it in October 2021 when she appeared as soloist with The Philadelphia Orchestra after the Hall’s 572-day pandemic closure.

This month on Carnegie Hall+, we salute this singular musician with two extraordinary performances on the channel, both of which are now available for on-demand, premium viewing: her sensuous take on Shostakovich’s witty and acerbic concerto for piano and trumpet, alongside conductor Mariss Jansons and the Concertgebouw Orchestra in 2014; and her 2016 appearance at the Salzburg Festival, where she adds jazz-inspired flair into Ravel’s Piano Concerto in G and Gershwin’s Rhapsody in Blue before lending her trademark refinement to piano miniatures by Mozart and Kodály. It’s a tantalizing start to an even broader collection on the channel, as more titles that feature the pianist are set to become available soon.

Born in Beijing in 1987 to an artistic family, Yuja Wang’s mother was a dancer and her father a percussionist—both, she has said, helped her early on with her rhythm. After studies at the Beijing Central Conservatory, she left her parents behind at age 14 to continue on at the Mount Royal Conservatory in Calgary. She entered the prestigious Curtis Institute of Music in Philadelphia the next year, where she studied for half a decade with Gary Graffman, a renowned Gershwin interpreter who noted her “gorgeous sound” early on.

Yuja’s odyssey into the public eye was initially the product of a number of high-profile substitutions for pianists, including Martha Argerich, Evgeny Kissin, and Yefim Bronfman. She would soon go on to sweep many of the music industry’s most prestigious prizes, including the Gilmore Young Artist Award, Gramophone Young Artist of the Year, and Avery Fisher Career Grant.

She signed an exclusive recording contract with Deutsche Grammophon in 2009. An extensive catalog of albums, as well as numerous Grammy Award nominations, soon followed—leading to her being named 2017’s Artist of the Year by Musical America, which announced in its annual honors that she “represents a new breed—the complete, thoroughly modern package.” 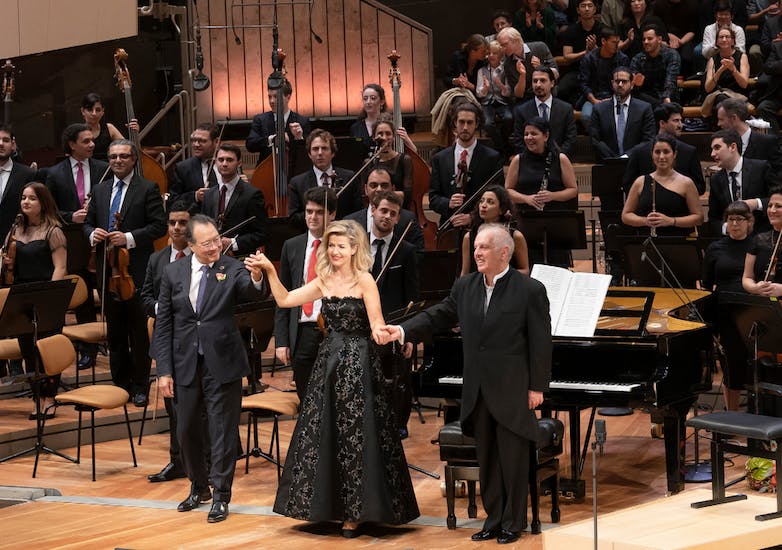 Sign up for a seven-day free trial and subscribe directly to Carnegie Hall+ on the Apple TV app for just $7.99 per month. Coming to additional service providers and territories in 2022 and beyond.

While in her early years she hewed close to the romantic works of Chopin and Liszt, her recent career has indeed brought Yuja great success in more modern fare, particularly the riveting masterworks of Rachmaninoff , Prokofiev, Stravinsky, and Shostakovich. “Those Russian pieces, they have a way of bringing out all the emotions, longings, the nostalgic feelings in us,” she once explained in an interview. “But at the same time, it’s like something larger-than-life, larger-than-human, something we’re all connected to … something bigger than us.”

Yet even as she conquered the 20th century’s most towering works, it was as much the variety of her playing as her virtuosic dazzle that earned her a starry spate of admirers. Many fellow musicians—among them violinist Leonidas Kavakos, cellist Gautier Capuçon, and comic duo Igudesman & Joo—jumped at the chance to join forces on her six-concert Perspectives series at Carnegie Hall in 2018–2019.

“When I first heard her, I was struck by how coloristic her playing is and how aware she is of the specific colors and character of the orchestra,” fellow Perspectives artist Michael Tilson Thomas told The New York Times. “She will play as a soloist but also as an accompanist when important things are happening in the orchestra. That is an unusual quality for a card-carrying virtuoso.”

Indeed, across her entries on Carnegie Hall+, Yuja’s gleaming palette of pianistic colors are on full display. The sweetly melodic, wistful, and steely elements of the Shostakovich concerto all come alive, inspiring the Concertgebouw Orchestra and trumpet player Omar Tomasoni to imaginative new heights. The sleek and urbane opening of the Ravel concerto at the Salzburg Festival is played faster than one might usually expect, laying out a glittering canvas for the breathless romance of the second-movement Adagio.

In these performances and countless others, Yuja Wang captivates with a dazzling sound, finding sparkle even in the most sardonic concert pieces of the last century. On Carnegie Hall+, subscribers come face to face with a musician whose playing honors the piano repertoire of the past while boldly forging a new future.

Concerts, operas, dance, documentaries, and more available in the United States and beyond. Start your free trial today!

Music lovers worldwide are invited to enjoy and explore a variety of specially curated playlists and more on Apple Music.

Honoring traditions while exploring bold new musical worlds are at the heart of our 2021–2022 season.